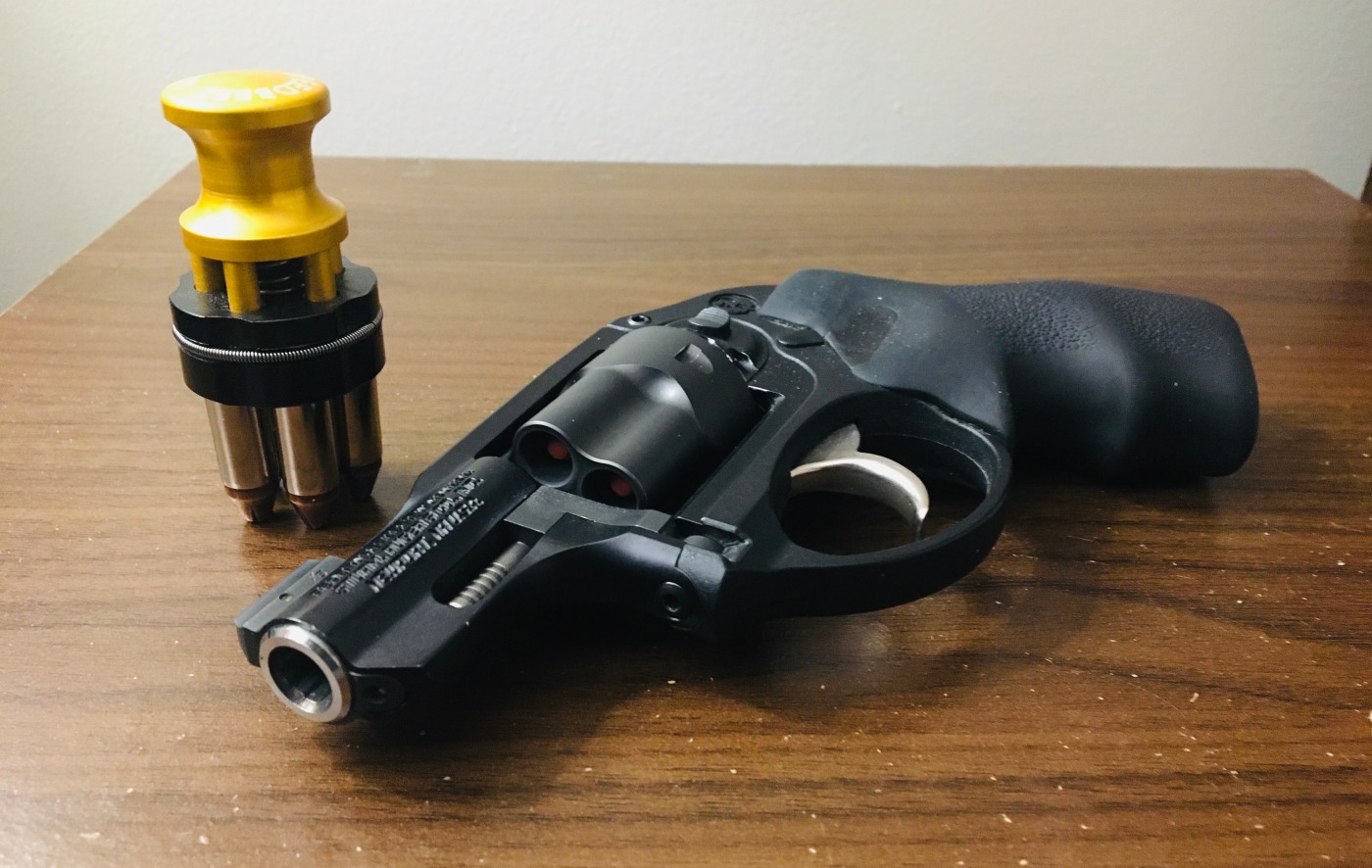 I have used a speed strip to provide a reload for my snub revolver most of the time I have spent carrying it.  The speed strip is easy to conceal, like the snub itself, thus making it the feasible carry companion.  Still, I have worked with all manner of speedloaders over the years, and have carried them quite extensively as well, though I always end up back at the speed strip due to the afore mentioned concealment advantage.

I have written about and demonstrated the four-round speed strip reload before (see here and here) and that remains my primary method for a snub reload, but I thought sharing my much-accumulated familiarity with speedloader techniques may be helpful to you as well.  I seek to do that here:

The two overall categories of speedloaders are “twisty” designs, that demand the user twist a nob to release the rounds, and “push” designs, which only demand that the user push the rounds into the cylinder charging holes to release them.  As is probably self-evident, push designs always outclass twist designs for speed and efficiency of technique.  However, some twist designs have the advantage of being more readily available for certain guns and may carry in a pocket better than push designs.

Of the twist design speedloaders, I have used HKS and 5 Star models for small-frame revolvers and I far prefer the 5 Stars.  HKS speedloaders are bulky and make loading small revolvers difficult.  The 5 Star speedloaders are better in this regard, and I find that they also drop their payload of rounds into the cylinder easier and more consistently.

Among the push variety, I think the Safariland Comp I speedloader is a good choice if you use a Smith and Wesson J Frame or Ruger SP101, but this model is not made for many guns beyond that.  Still, the efficiency of the Comp I is limited due to the fact that it just relies on gravity to insert the rounds.  Other loaders, like the Jet Loader and the Speedbeez loader, use spring tension to insert the rounds.  The downside is that these loaders are larger in size.   My preferred speedloader for my preferred snubby (the Ruger LCR) is the Speedbeez.  It is the fastest and most efficient loader that is available for the LCR.  The negative is that the Speedbeez will dump its rounds on the floor if you drop it, whereas most twist models, and some push models, will do a better job of retaining rounds if dropped.

There is a variety of variations on the reloading technique that can be employed.  You can reload the revolver by using your dominant hand or support hand to access and actuate the speedloader.  You can do either regardless of whether you are right-handed or left-handed, simply by employing different combinations of technique.

Generally reloading the revolver with a speedloader requires several tasks:  First, the cylinder latch must be engaged and the cylinder must be opened.  Second, the gun must be inverted upward so that gravity will aid in ejecting the cases when then ejection rod is pressed (or whacked, vigorously).  Third, the speedloader must be accessed, inserted, and actuated into the cylinder charging holes while the gun is facing downward so that gravity allows the rounds to fall into and stay in the holes.  Forth, the cylinder must be closed, the grip re-acquired, and the gun brought back online.  It is a motor-skill intensive process, thus it is harder to do consistently and quickly than is reloading an auto pistol.

Finally, bear in mind that reloading a small-frame revolver, which is what most folks use for defensive purposes, is much harder to do than reloading a full-frame revolver.  The reduced platform makes the manipulation and the speedloader fit much harder, so this already intensive task is that much harder.  A sub-three second reload with a full-size competition revolver is fairly common, not so for reloading a snubby, especially if the speedloader is carried in the pocket or concealed on the waistband.  Depending on the speedloader mechanism and carry location, a sub-five second reload for a snubby is doing well, and that is a long time.

Finally, I will say that this is a skill that I do not practice regularly as I don’t often carry a speedloader and I don’t put much stock in the feasibility of getting a snub reloaded in a fight anyway.  With that in mind, I would think that you could do this reload faster than me if you wanted to invest untold hours into the technique.  I have done it enough, over the course of years, to be proficient, but I think the investment in time to take this reload from 4.5-5.0 seconds down to sub-four seconds, which is probably possible, is not worth the effort for such a fallible and unlikely skill.  Your mileage may vary:

Watch a live-fire demonstration of the speedloader reload: