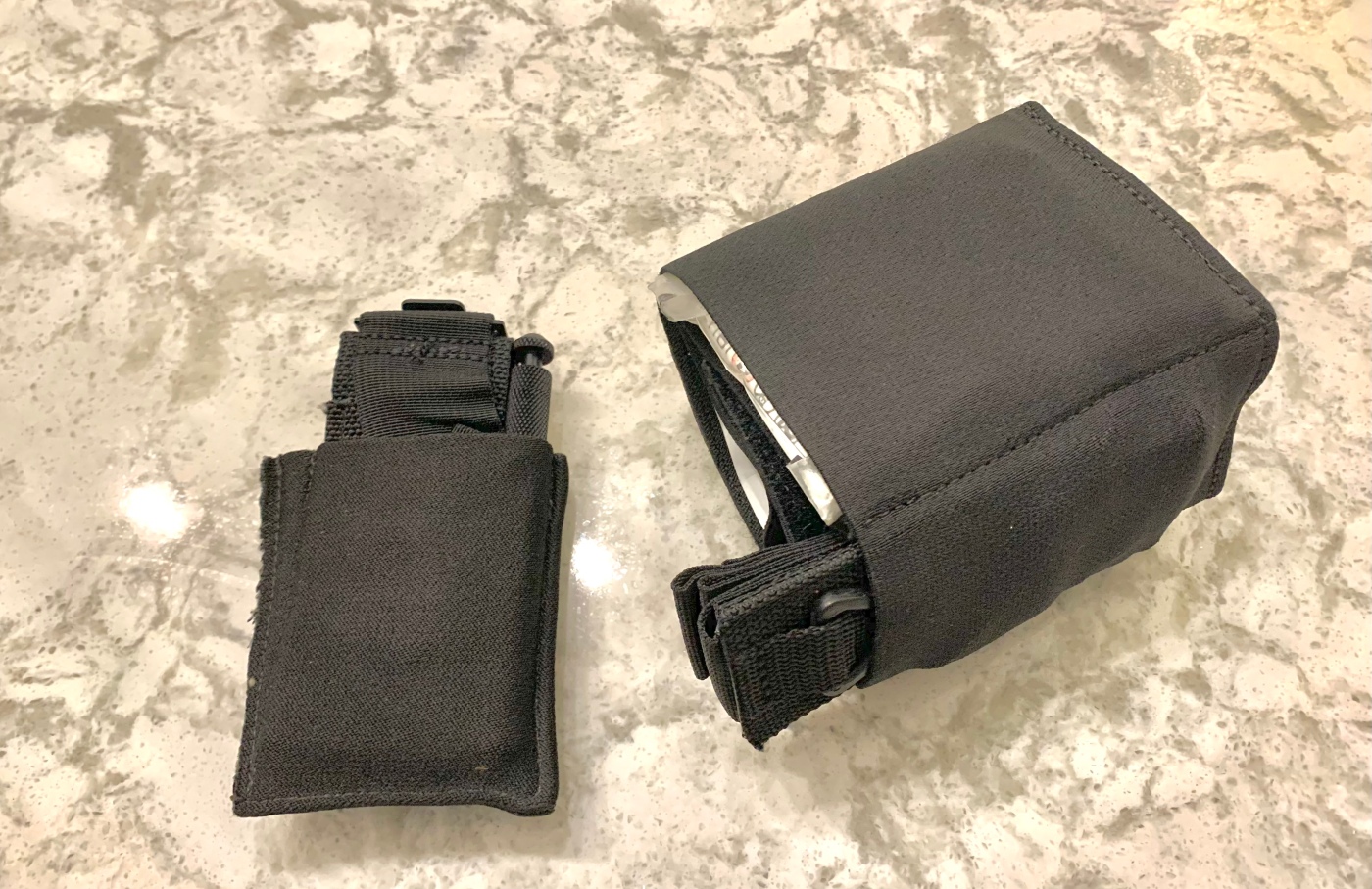 Thanks to the GWOT (Global War on Terror) the civilian sector is now awash with vetted hemorrhage control devices.  Prepared citizens are more aware of the need for such gear, and the training on its use, than in times past, though still only a small fraction of the public carries or knows how to utilize trauma gear.  There are twenty-two million carry permits in the United States at the time of this writing, though I would bet far fewer people carry a trauma kit.  Yet, statistically, it is not hard to understand how most people are more likely to need trauma medical gear than a firearm on any given day.  The more serious practitioners of self-defense and self-reliance are getting on board, however, and there is now an industry that caters to the gear and training needs of emergency trauma medicine.

If you read this blog there is a high likelihood that you carry a gun, and perhaps some medical gear, on person, at least some of the time.  With this audience in mind, I wish to offer some consideration on what we should try to carry on-person concerning medical gear.  It should go without saying that your vehicle and home should contain a full-blown trauma kit with multiple tourniquets, packing gauze, pressure dressings, and chest seals.  In the event of a car accident that impacts you or yours, or other people on the highway, you would want a kit with significant capability to aid multiple casualties.  However, we are far more limited in what we can carry on-body.  Still, I remain a firm advocate of carrying at least something on-body, as a life-threatening bleed that occurs far away from your home or vehicle will not afford you time to run to and retrieve the needed tools.  So, what should we carry on body in even a minimalistic capacity?

For many years the tourniquet has been considered the single most important emergency medical tool to carry on-body.  This notion was greatly encouraged by the GWOT; don’t quote me on this, but I recall seeing studies in the past that have indicated that about eighty percent or more deaths in combat result from bleeding from extremities.  This is hardly surprising, as solders in theaters of combat are armored.  So, if Snoop Dogg was a paramedic, he would tell you that the tourniquet is the shizzel, ya dig?  But, civilians don’t typically walk around wearing body armor and a helmet.  A few years back a study came out that analyzed casualties and deaths over the scope of many active shooter incidents.  Over ninety percent of victims in such attacks died of wounds to the chest and head.  So, if Snoop Dogg was a Tactical Timmy he would now tell you that the tourniquet is no longer the shizzel, ya dig?  Rather, chest seals are the new hizzel.

So, now its time for a reality check, two points:

1. The experience of armored soldiers does not apply to peace-time citizens.

2. The active shooter threat should be considered, but not obsessed over.

If you read my writing here and elsewhere you know that I have addressed many concerns revolving around the active shooter threat, so I do not discount it, but it remains statistically infinitesimal, and in terms of the reasons you will need medical gear it is quite low on the totem pole of likelihood.  What is far more likely a concern?  Car accidents are an ever-present, but, again, that is addressed by keeping a full trauma kit in each vehicle.  Beyond that, however, what are the more likely causes of life-threatening hemorrhage?

How many people do you, personally, know that have been shot or stabbed versus how many have gone through plate glass windows?  How many people do you know who have been severely injured in industrial accidents?  If you are a door kicker you may know more people who have been shot, but for the rest of us, you likely know far more people who have been cut by glass or injured in workplace or homestead accidents.  Statistically, nation-wide, it should be no surprise that accidents of various sorts kill more people than do gunshot wounds.  So, while violence should be part of our consideration, it should hardly be the primary focus.

We are all creatures of our own experiences and growing up in a rural environment I can tell you that farming and wood cutting accidents were entirely common.  I personally know, or know of, numerous people who lost limbs in farm machinery or to a chainsaw.  This leads me to the point that, if you look at the common trend in such work-related injuries, bleeding from extremities seems, statistically, very high, at least in such an environment.  machinery accidents often lacerate or amputate the limb.  Certainly, impaled objects are also common.  I can’t think of any actual medical studies on this, if you know of any leave them in the comments.  Still, I know of too many such incidents to be only anecdotal.  Therefore, if you work in any sort of rural occupation such as farming or wood cutting, or if you work in an industrial environment, it should be obvious that you are, statistically, far more likely to encounter such machine-induced trauma compared to gunshot or stab wounds, and machines tend to injure the extremities.

So, when discussing what we should carry on body, accepting the fact that most of us can’t carry all possible gear for all possible scenarios, what should we carry?  Of the big four medical devices to control severe hemorrhage, these being the tourniquet, packing gauze, pressure bandages, and chest seals, what should take priority?  Carrying all four is ideal, but what if we can just carry one?

If you carry only one medical device on your body, it should probably be a tourniquet.  Carry a CoTCCC approved tourniquet.  For every-day carry purposes the SOFT-T Wide is hard to beat as it can be flat folded and made much smaller than the equally ubiquitous and effective CAT tourniquet.  Any of the committee approved TQs are solid, but please, avoid the glorified rubber band and bungee cord options that are not approved.  A good TQ needs a windless or a ratchet.  A tourniquet, worn on the body, is a tool that can prevent death from traumatic bleeding in many, many, scenarios.

Carrying just a tourniquet, I would argue, is doable for most, especially the folks already making the commitment to carry weaponry.  I often carry a full trauma kit on my ankle when embarking on activity that I consider higher risk, but I always carry a tourniquet.  In every mode of dress and under all circumstances I have a tourniquet on my body.  I carry a SOFT-T Wide in a small pouch.  Behind the TQ I also have a small pack of Quick Clot gauze, which is a nice extra, but in order to fit it is too small to pack a serious wound.  Still, as per the discussion above, the tourniquet alone can do a lot and is probably the most critical tool for unforeseen trauma.  This pouch rides in my hip pocket and is the footprint of a phone.  Just as I always have my keys and my phone on me, I also ALWAYS have this TQ pouch on me, regardless of whether I am carrying my primary or deep concealment gun, or not carrying a gun at all.  A tourniquet and other medical gear can go anywhere.

When wearing pants and out and about with the family for certain activities I wear an ankle kit that contains a SOFT-T Wide tourniquet, a full pack of Quick Clot gauze, a mini compression bandage, and two chest seals.  Obviously, this ankle kit gives me more capability than only the TQ alone.  The problem remains, however, that I can’t wear the ankle rig all the time.  When I can, though, I do.  For most men an ankle rig is probably the most efficient, if not simply the only, way to carry a full trauma kit actually on-person.  For women it is usually more difficult due to clothing differences, but keeping a full trauma kit in a purse or other bag is a great idea. If you are an individual that carries a go-bag everywhere, as many men do, it should go without saying that you have a trauma kit with the primary four hemorrhage control devices in it.

So, in closing, carrying a full trauma kit is ideal, but very hard to do consistently on body.  Keep a full kit in the vehicle, in your bag, and everywhere else you deem necessary.  For on body, however, I think carrying at least a tourniquet is possible for most, and as discussed, is likely the best choice for a single hemorrhage control device for the average citizen.

One thought on “A Realistic Approach to Carrying Medical Gear”