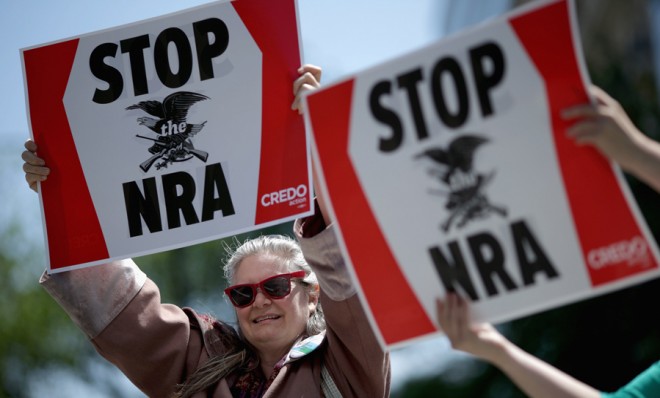 I have found a consistent pattern among leftists who are fanatical Second Amendment haters: they worship the state.  Government is their god.  While the average democrat typically votes for other issues, guns not factoring heavily into the agenda, the far-left commies that truly hate private gun ownership do so for a singular reason: it is a road block to total state control.  How dare you defy their god?  Did you really think that gun control is about public safety for these people?  How safe is Baltimore and Chicago, two of the shining examples of extreme gun control.  The average useful idiot might think gun control is about safety, but those capable of even rudimentary logic see through that.

Rather, the gun grabbers are appalled by the idea that the average plebian is allowed to have scary looking guns, especially black guns that look like something only a soldier should have.  A soldier, mind you, is a sanctioned enforcer of the state, so the soldier having a gun is unavoidable, at least until socialism works, unicorns become real, and all the other leftist fantasies come to be.  The fact that civilians have such tools is a direct affront to the leftist god, the state.  It is akin to the way in which mono-theistic religions view pagan idol worship.  Most mono-theists, however, respect the Constitution, as well as the dignity of other people who make their own choices.  Leftism is the only religion that truly abides no apostates.

How do I make this overall claim?  Simple:  Every true anti-gunner claims that no civilian should have “military style” weaponry.  Then, right after saying that, they tell you, “besides, what good will your gun do against the government’s tanks and planes and bombs, anyway?”  See what I mean?  Worship of the state.  Ironically, every single ex-military patriot I know thinks differently than that.  I also remind the leftists that in Afghanistan, for two decades now, a bunch of sandal wearing goat herders with rifles have managed to defy the most powerful military on earth.  Yet, in the mind of the leftist, 120 million American gun owners, with 420 million guns and 15 trillion rounds of ammo, cannot do the same even on that government’s own turf?

Despite their ivy degrees and urban sophistication the gun grabbers can’t get even the simple things right.  It is amazing how desperately some people hate liberty.